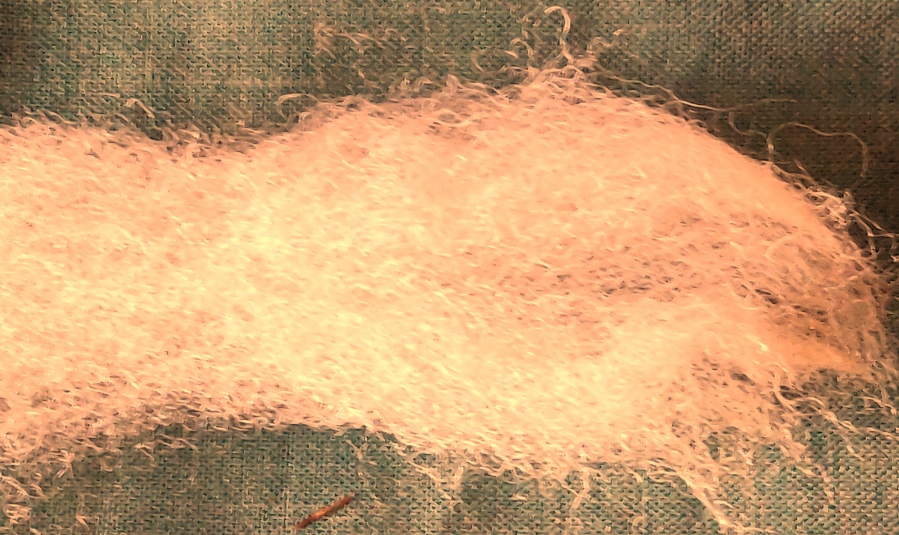 Although I promised myself not to get any more fleece until I had emptied my cupboard, I’ve cheated . Well only a bit. Over the winter I have used a lot up, but not all of it!

Having been to Herefordshire and seen the Ryeland sheep sculpture in Leominster I read up about the Ryeland breed and wanted to try a fleece. From what I understand the Ryeland was one of the breeds that can from the Romans crossing their imported Merino sheep with local British breeds. This is probably why they look like Teddy Bears with dense fleece. This breed was instrumental in the success of the British wool trade in the Middle Ages and after, which laid the foundations for wealth in Britain, especially in Herefordshire. Fascinating stuff!

The long and the short of it is that I now have a Ryeland fleece to play with. I sorted out today and have started to wash it with promising results. Not to much VM, but a bit yellowed – the name for this escapes me right now, is it ‘yoked’? I’m guessing its last years crop.

You can see a staple in the photo, and i’ll post once I start spinning. I plan to spin Long Draw, ply and then to dye it. 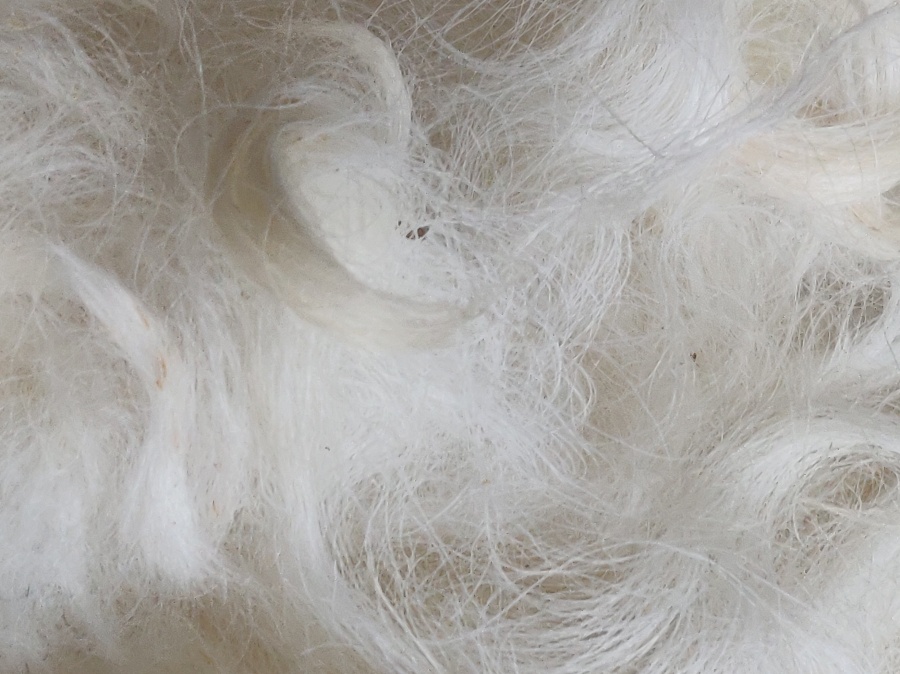 Washing (or scouring) raw fleece is not a quick job, I think that’s something all can agree on. It’s also surprisingly contentious. Everyone wants to tell to their method, and you gradually learn that different fleece require different scouring methods, so everyone is probably right!

So I’m going to write about my experience today.

I have been given a rather nice Shetland fleece. Rather nice that is, but filthy. The fleece is very greasy and every single lock is gummed together and dirty at the tip. Underneath however, you can see the gorgeous fibre hidden under the grease-trapped dust and poo.

I gave some of it a good hot soak  yesterday with plenty of washing up liquid. The water was like oxtail soup (sorry if you like oxtail soup), but after a few rinses it seemed OK.

However, this morning’s inspection showed it to be still greasy and those dratted dirty and sticky tips were still gummed up.

Rather than transfer that gunk to my carder I reluctantly decided to re-wash the fleece. So more really hot water baths followed. The first was so hot I couldn’t put my hand in it, with loads of washing up liquid and a dose of washing soda to break the grease. I  always wash the fleece separated into small mesh lingerie washing bags. With this second wash, I opened each bag, one at a time under the water and teased the locks apart, concentrating on those dirty tips to loosen the greasy dirt.

Yes it was time consuming, bit surprisingly gratifying as the dirty came out quite easily with this method. I think because the fleece has just been sheared the dirt hasn’t had to much time to harden-off.

Now it’s drying out looks amazing and is so soft.

Today I wanted to dye some of my hand spun wool yarn a bright green. No natural dye I have would do this, and I didn’t have any green acid dye, (or any acid dyes at all), so I decided to use food colouring. I already knew that food colouring works as a fibre dye but did not realise that it was an acid dye, (thank you Google) so works best on wool, silk and other protein fibres that will dye with an acid dye. Acid dyes are not acid, but they require an acid such as vinegar or citric acid to attach themselves to the fibre.

Initially I’d intended to use liquid food dyes but discovered I have either thrown them out or someone had used them up, so had to resort to the paste colours I used to use for sugar flower modelling. These seemed to work fine and are quite intense, if a little harder to dissolve, (I had to squash some lumps against the side of the jug). I may use them again as they are just sitting in the cupboard at the moment.

So to prepare the yarn I soaked it in a mixture of one part vinegar to two parts water for about 30 minutes. This did two jobs at once, soaked the fibres to remove trapped air and added acidity. I could have added vinegar to the dyebath instead.

Meanwhile I put some water to heat on the stove and mixed the bright leafy green I wanted from my stash of food colouring dyes.

I mixed the food colouring paste with hot water in a small jug, and added a teaspoon of salt, (this helps to level the colour and increase its take-up), stirring them well until the liquid was clear, then added this to the pan of water that was warming on the stove.

When the dyebath was ready I removed the hank of wool from the vinegar and water soak, gently squeezing it to remove excess liquid, and immersed it in the dye. The temptation to stir the yarn into the dye bath is always with us, so I gently prodded it below the surface and walked away and left it. It took about 20 minutes of gentle simmering, turning the yarn very gently once, to achieve the colour I wanted.

Because I liked the colour so much I decided to dip a second hank quickly into the dyebath so I got very pale green and then, having rinse it to check the colour, I trailed half the hank into the dyebath again and let it stay in there until it became darker. This gave me a dip dyed, ombre yarn in tones of the same green.

Post-dyeing rinses brought the brightness down a little on both hanks, but overall I was pleased at how little colour came out. I rinsed quite hot; wool can take high heat and won’t felt, as long as you don’t agitate it or put it straight into cold water. The important thing is to have the rinsing water at a similar temperature to the dye bath. Wear gloves to protect your hands during these hot rinses. To save energy you can slowly decrease the temperatures through the rinses. Never let the tap run onto the wool or it is likely to felt.

Because it was a lovely day today I hung the hanks out in the garden to dry, but you can spin dry them as long as you put them inside a mesh laundry bag or a calico bag. 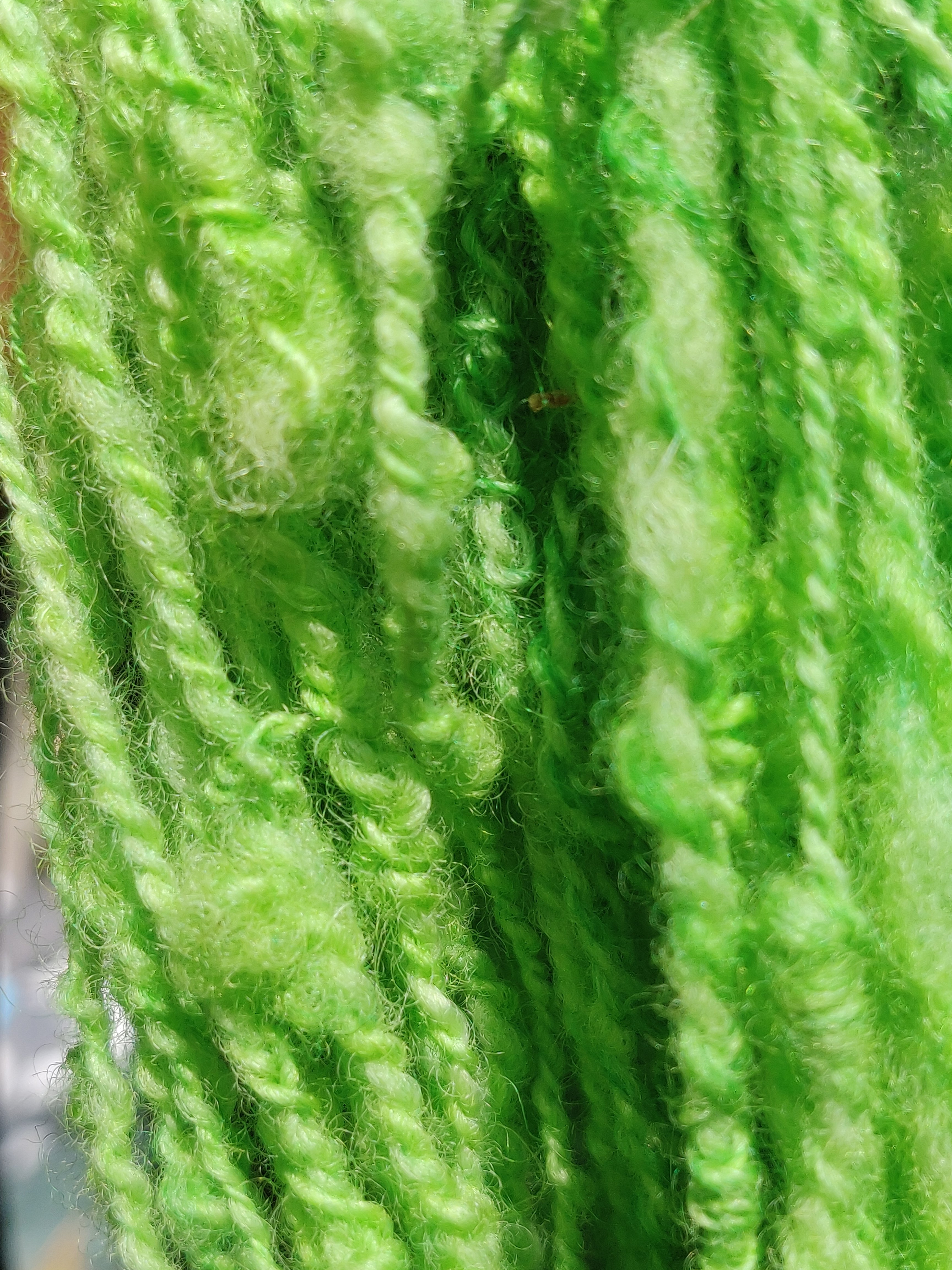 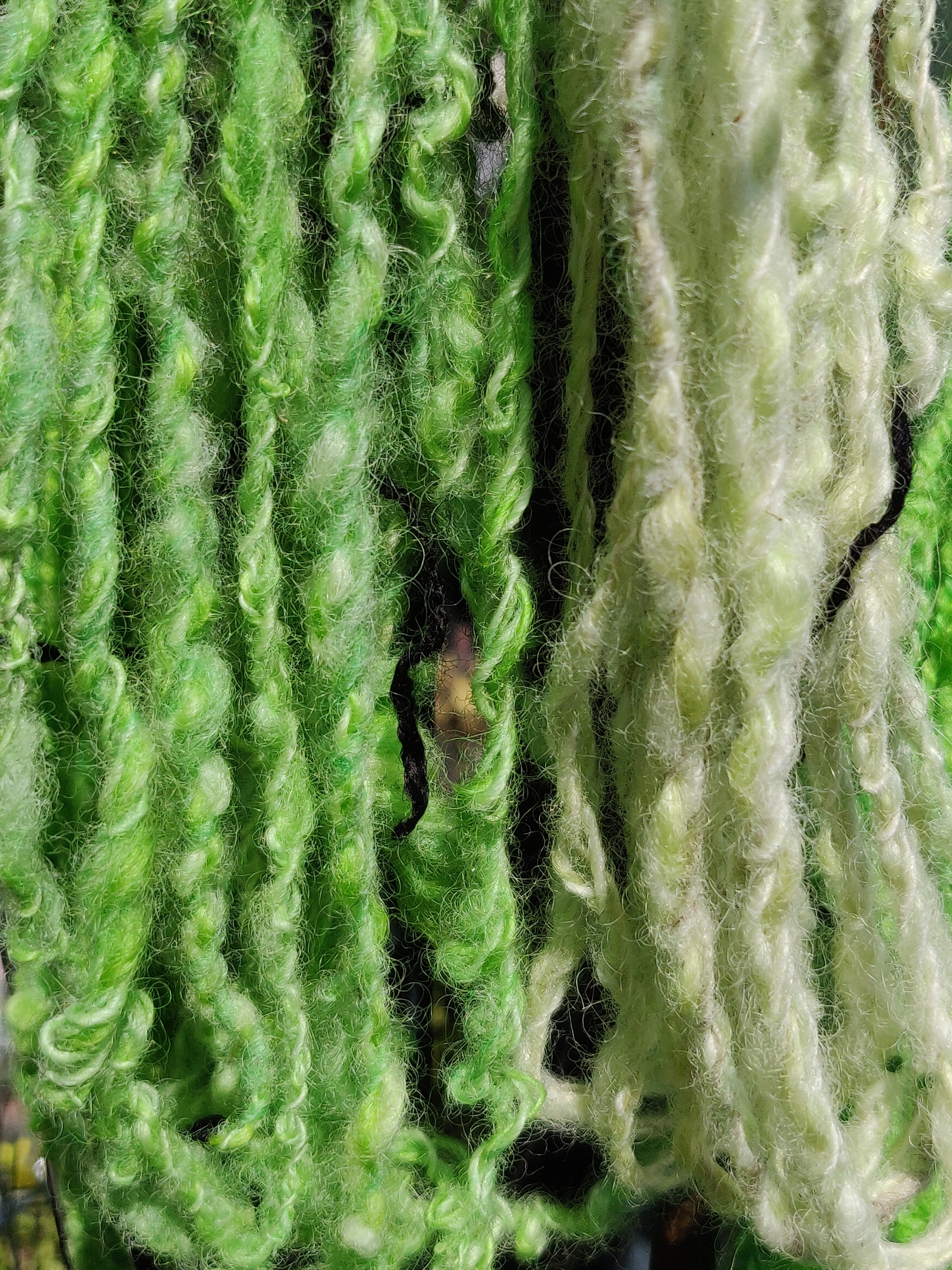 Both yarns were handspun with a bouclé effect. The dip dyed one took the colour less well partly because it was from a different fleece, and partly because it should really have had an additional scour before going into the vinegar soak.