A happy hour or so spent hand carding hand dyed fleece, whilst watching tv. Then using my home made blending board to make the next batch of rolags to spin more of my ‘Greenfinch’ variegated singles.

I have a large sack of Texel fleece that had been making me feel guilty for a while. It’s not the most soft of fleece so I decided to blend it with some Alpaca that has also been lurking in the cupboard. Unfortunately the Alpaca (from an animal called Kiki), has quite a bit of VM in it, but it is deliciously soft.

Picking and hand picking got a lot of the VM out, but sadly not everything. I carded both the Texel and Alpaca separately and then split the batts and layered them up in alternate layers; one wool, one Alpaca etc, and put them back in smaller batches through the drum carder.

As my carder is quite coarse I do a second run through for most fibres. So I did it for these batts. I think I probably should have done a third run, but I was afraid of over-carding the fibres and decided they had blended well enough. The result is a little uneven!

I’m now perfecting, (ha ha) my long draw technique with several hundred grams of comb waste that I have carded up. Hopefully by the time I get through that I will be proficient enough to tackle long draw spinning that large amount of Texel/Alpaca fibre!

Having a few smallish quantities of hand spun yarn I decided to dye them.

The first was about 30g of blended tussah silk/wool singles that I’d then plied with itself. This is a slightly textured yarn with an interesting matte surface owing to the silk content. It took the deep purple dye beautifully, although the different fibres had varying take up of colour, so it isn’t quite even.

The second was a black and cream space spun yarn, plied with a solid cream. The solid is made from 50g of cream Suffolk fibre, woollen spun into singles. The second singles, with which this is plied, was prepared on a drum carder in alternating stripes of the same cream yarn and stripes of black Belwin fibre. This 25g batt was then woollen spun into singles, after which the two yarns were plied together into a 50g hank. This combination created a pretty spaced marl effect along a yarn which is reasonably even in thickness throughout.

The completed yarn was dip dyed in the same dye pot as the silk/wool yarn, plus another pink dye I had on the go. It was dipped a little into some yellow as well. Over-dyeing this black and cream marl yarn gives the impression of many more colours than there really are.

I’ve used the silk/wool as a band for a hat and the over dyed marl as the crown. 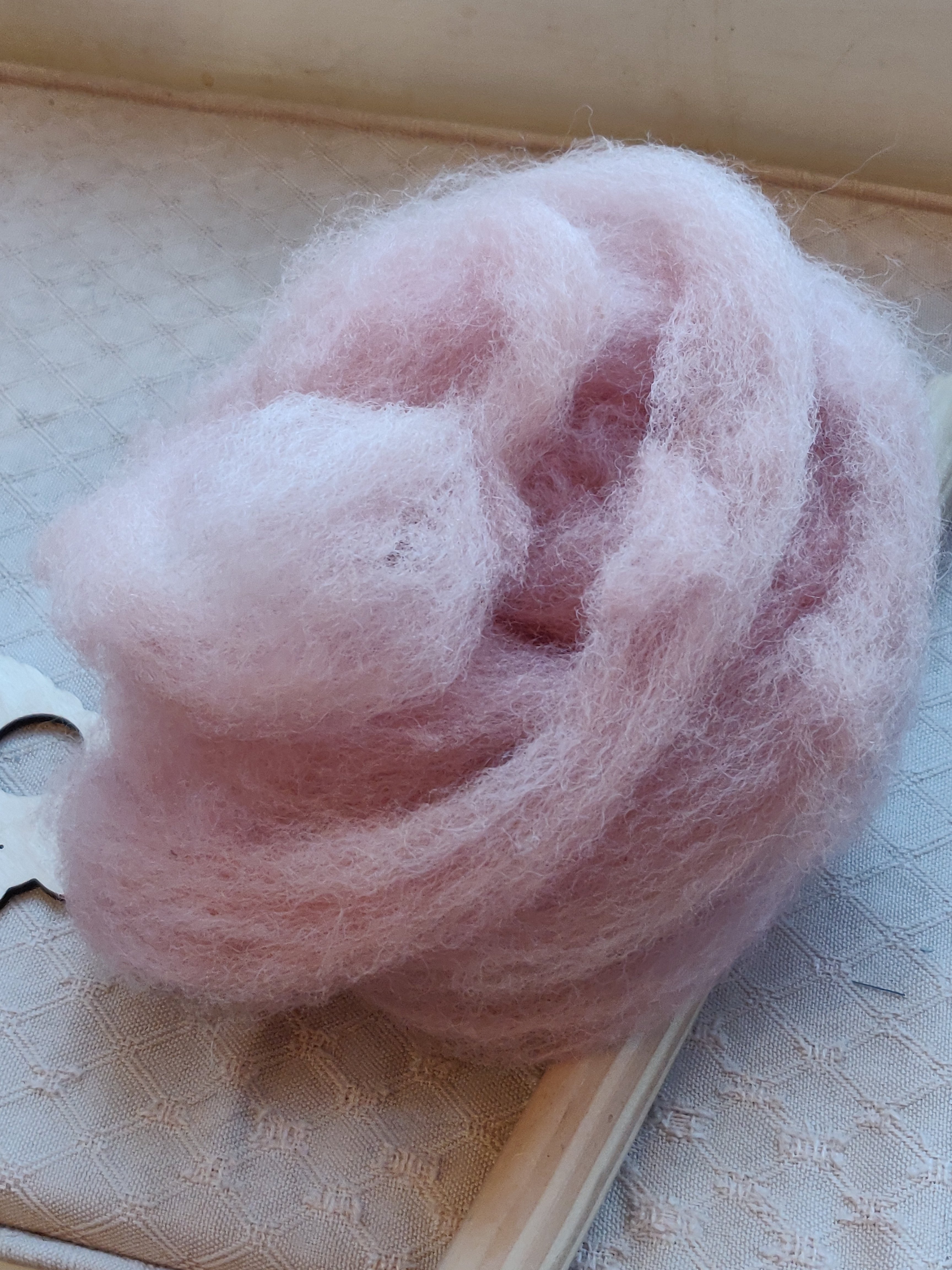 It just looks edible. I can even smell the sticky hot sugar.