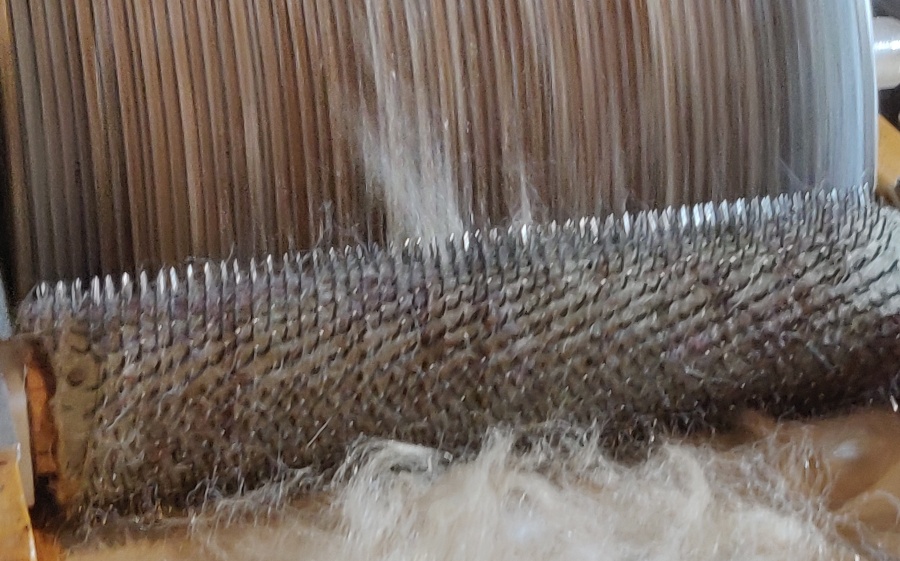 I’ve had a drum carder for a year or so now, and love the way it makes prepping fibre so much easier. When I first began to use it I developed terrible back ache because the table it was on was at the level of a dining room table, a really bad height for standing to work at. So now I have a raised, standing height table in my studio and everything, including carding is now more comfortable.

However, even then, turning the handle for an hour or so led to some aches and pains, plus I began to find that the stop-start of filling the hopper and getting going again was annoying me. It broke the flow of the carding, and slowed me down; encouraging me to skimp on the time spent using both hands to open the fibres before being able to grab the handle and put the fibres through the carder. So of course, I began to look at whether it could have an electric motor added.

Luckily my son is very electrical-savvy, and after some thought and planning he has engineered a little motor for the carder. It’s not going to break any speed records, rotates a little bit slower than I would turn the drum and is only one speed, but what a difference! This gives me ample time to open the fibre up properly (using both hands, oh joy), and pick over the fibre as I fill the hopper in a constant flow. Because the motor won’t allow me to turn the drum backwards, I disconnect it each time I want to doff the batt. This is a simple slide-off and on procedure and may be overcome in a later revision.

This is the prototyoe, and he’s already planning the next upgrade, so watch this space for more news.

My first test fibre was of Shetland X Cheviot, which was quite coarse but can out airy and even. The test fibre in the short video above was alpaca, which was a bit slippery and fine for the carder, but again came off looking great. I’m going to dizz this off the batt and spin the fibre semi worsted to compare to some hand carded singles of the same fibre I spun earlier in the week.

So far it’s making carding the fibres a lot more pleasant. It’s still a bit Heath Robinson, but he will box the motor in once the new (smaller) parts arrive. Yippee…..