In preparation I have been experimenting with common plants to see what colours can be achieved. In the local park there are plenty of plants to try out. Cow parsley and dock (sorrel) were the ones on test recently.

I hope it was cow parsley anyway, Google lens wasn’t sure if it was hemlock or a type of chervil (cow parsely). Hoping that I wasn’t going to go the same route as Socrates I brewed up the innocent cow parsley (yes I had found out by now that it was safe).  The liquid didn’t look promising, unlike the sorrel liquid that was already a rich golden colour. Steeping the ripped leaves overnight didn’t improve it much either.

However, once the wool fabric had been immersed and heated the colour did come through. I tried an alkaline modifier on the sorrel to try to warm the brown up, and an acid on the sorrel to enhance the green. Im not sure either made much difference! 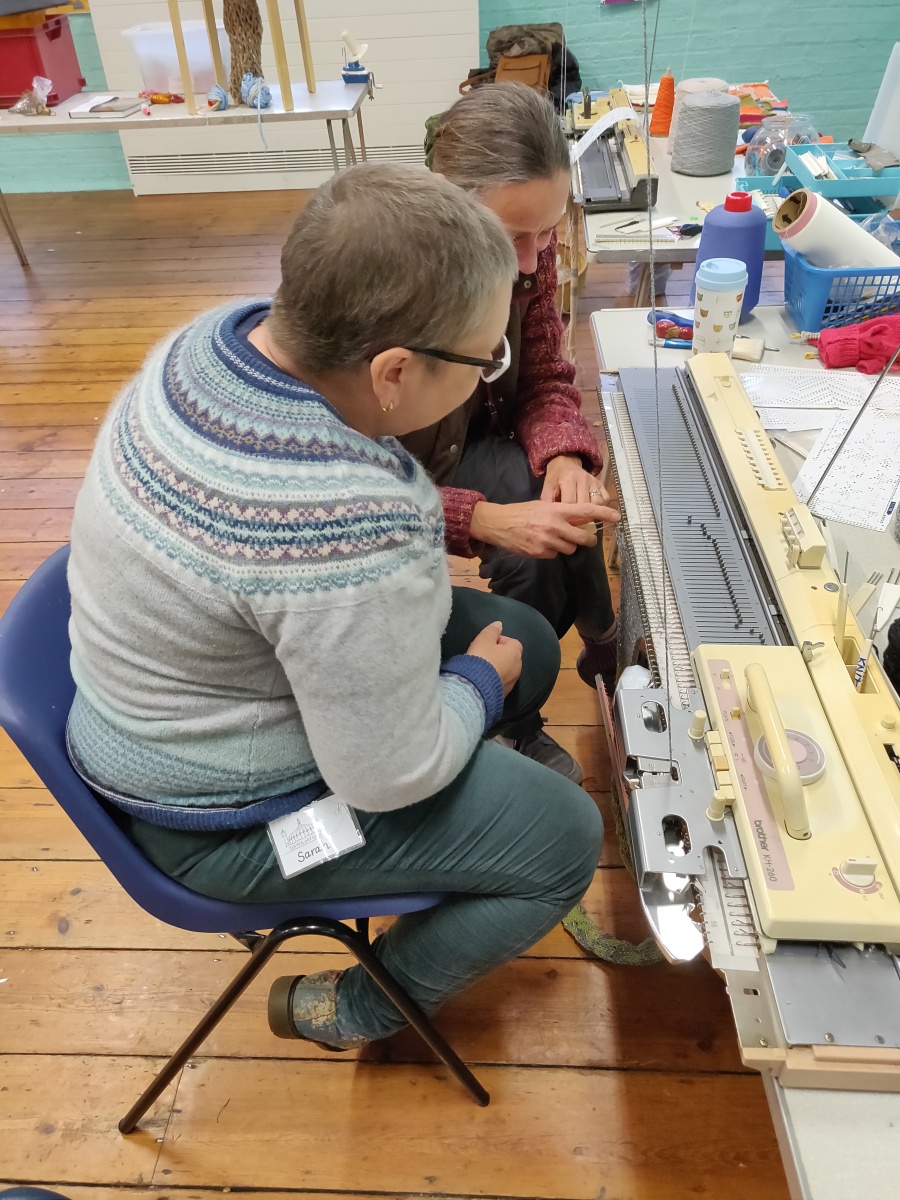 Today I ran a workshop that introduced members of Brighton Textile Art Group to machine knitting. To give a wider experience both a Knitmaster and a Brother machine were used, one standard and one chunky gauge. The chunky was particularly popular once it was found that it can knit handspun yarns.

I took along a little circular machine to demonstrate the difference between the two machine types, but the real interest was in the flat bed Japanese machines. 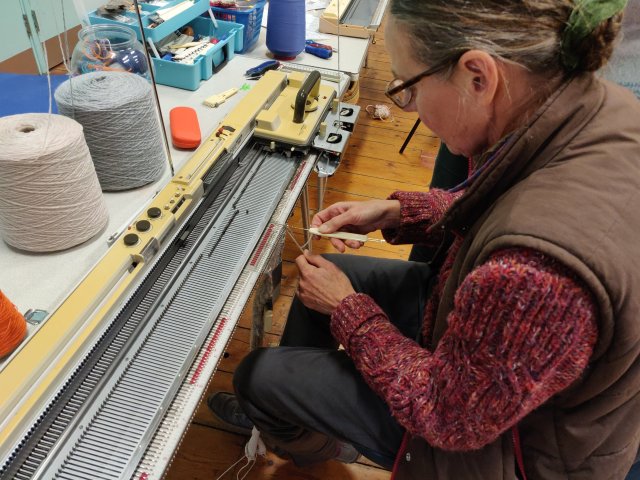 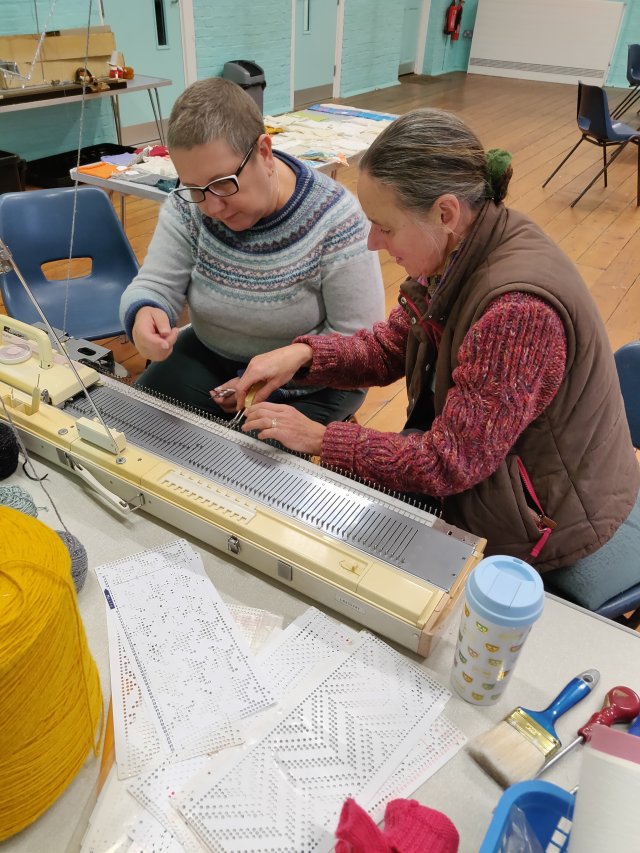 After the workshop response were really positive; people who had thought they would hate it had great fun, and those with machines were enthused to go home and get them out. Unfortunately the workshop clashed with the East Sussex Guild of Spinners, Weavers and Dyers meeting, so another workshop had been requested in the Spring or Summer of 2020.

The South Downs are home to the Southdown breed of of sheep, the wool from which can be used for hand spinning. So to support the local Shout Downs national park and sheep farmers I joined several other members of my local spinning group, Woolly Umbrella, and took my skills (basic as they are) along to Wild Chalk. This free event, organised by the South Down National Park Rangers, was held in East Brighton park. Our part was to demonstrate spinning wool and encouraged people to have a go. I took along several drop spindles and a sack of washed fleece. Others brought along a spinning wheel, drop spindles and needle felting to share, plus an exhibition with some beautiful examples of naturally dyed, handspun wool. Most people were spinning the local Southdown fibre but mine, to my shame, was Texel cross Southdown. 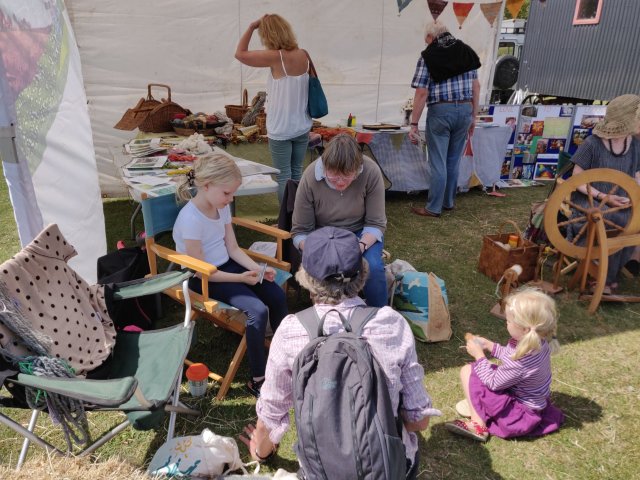 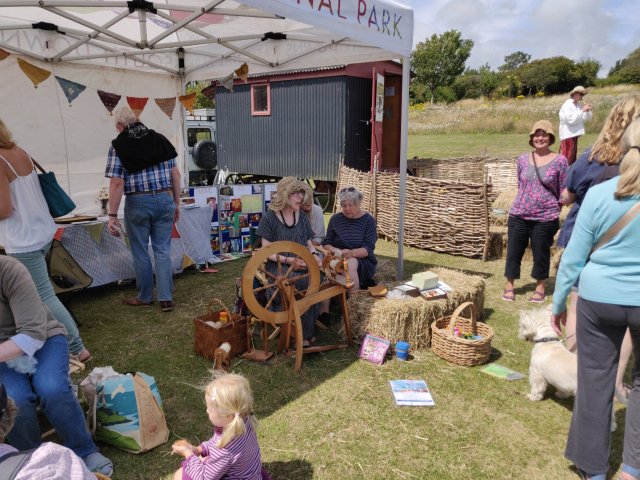 As you can see children and adults alike really loved to watch, and most of them tried spinning from fleece to some extent or other.

I practised with a newly acquired Turkish spindle and using the Andean Plying technique even produced some reasonable 2ply.

Well I did it, I made it along to the meeting today and joined the group. Thank you to all the kind members who made me feel so welcomed. There was a natural dyeing workshop today, but of course I had not booked in advance. However, I took some singles spun on my Spurtzler and plied this using my hands in an Andean ply. Then I had two little hanks to dye in the onion skin and the daffodil dye baths.

Click on the photo to visit the brighton Textile Art Group website and see what other events and workshops are in the future.

There is a little more detail of the day on my Natural Dyeing page.

I have been planning to join this group for ages – the time has now come. 11th May is in my diary as the next meeting.

Yesterday was a busy day, and included a two hour workshop on very basic natural dyeing. Because I wanted to make it as accessible as possible, and keep costs low, it mainly featured ‘kitchen’ dyeing.

I’d asked people to provide thier own 100% DK wool yarn, (I even suggested a yarn brand to look for as I know this one dyes really well), and prepare it in hanks. I then mordanted it over the weekend, and took it into the workshop ready to go into the dye. Unfortunately there was some confusion (well isn’t there always), and so some brought Aran, others brought 4ply and they were all different spins and types of wool, (but luckily only wool blends, not with synthetics).  I’d written out clear instructions on how to make balls into 10g hanks on the back of a chair – but even that went a bit wrong for some, so I then had to unwind and re-hank it all. At that point I began to wonder why I was doing this for free!

So now I had a kilogram of yarn soaking ready to go into an Alum mordant. Of course the more wool, the more water, and the more likelihood that you will soak the floor – which of course I did. So by the time I got it into the mordant I was not in love with the yarn! 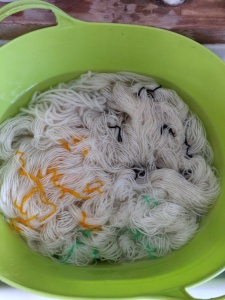 My BIG pan was not big enough, so two lots were necessary, and the room was a bit steamy by the end of it all. I use a portable induction hob for dyeing – I think it is pretty energy efficient – and love it’s responsiveness. 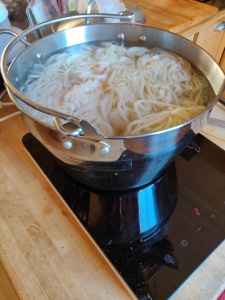 So on to the workshop. Our dye materials were:

Ammonia and vinegar were the only modifiers used to change the acidity of the dye baths, as I did not want to work with copper or iron in this situation.

Firstly a concentrated dye was made by boiling up  the chopped red cabbage, onion skins, and coffee grounds in enough water to cover them. The avocado baths were brought to a high heat, but not boiled as this helps keep the colour fresh and pinker. Once the colour was really released (this took between 30-60 minutes), these concentrates were strained into larger pots, cold water was added to make them lukewarm, and salt stirred in to help fix the colours. The red cabbage was divided into three baths: one left plain, one with ammonia added and one with vinegar added. The plain dye yields a purply-blue, ammonia encourages the dye to yield blue/green and the vinegar brings out a lilac colour. This was the fun part; the students introduced their hanks of yarn to different dye baths and they were brought back up to tempature. There were lots of ‘oohs’ and ‘ahhs’ at the lovely colours – even though I explained that they may change or wash out!

They experimented with tie-dying, dip-dyeing and rinsing and over-dye colours. Some more successful than others of course, and time (and hanks of yarn) were limited. One asked me, ‘Can I do this at home?’ , which seemed a strange question to me, but in retrospect it was a reasonable one, because it all seemed a bit to easy! 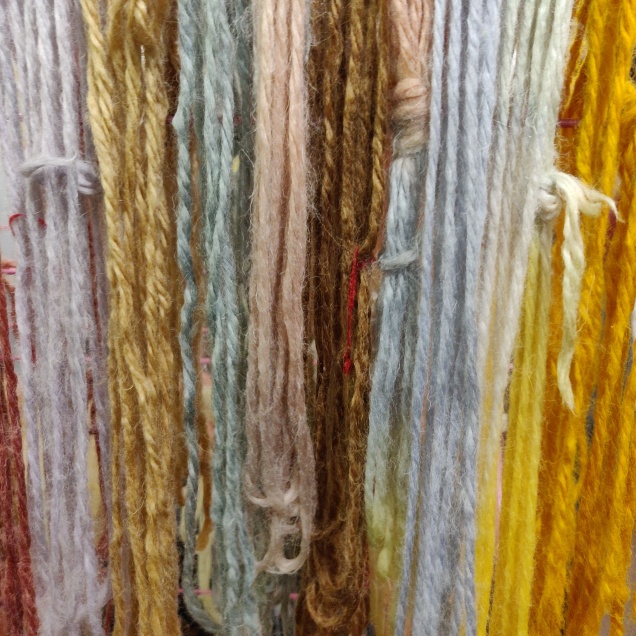 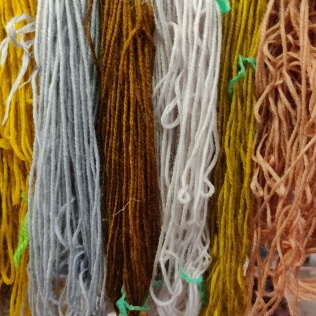 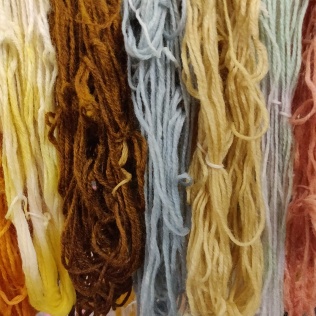 Last week I hosted a ‘learn to spin’ afternoon. We had drop spindles and two wheels. Because no-one had spun before I started with lengths of commercial my sun yarn – about 12 metres each. These were used to learn the basics of working the spindle and twist direction.

After everyone was feeling more confident, fibre was introduced. This was lightly scoured Jacobs fleece with a little oil left to make it easier to spin. 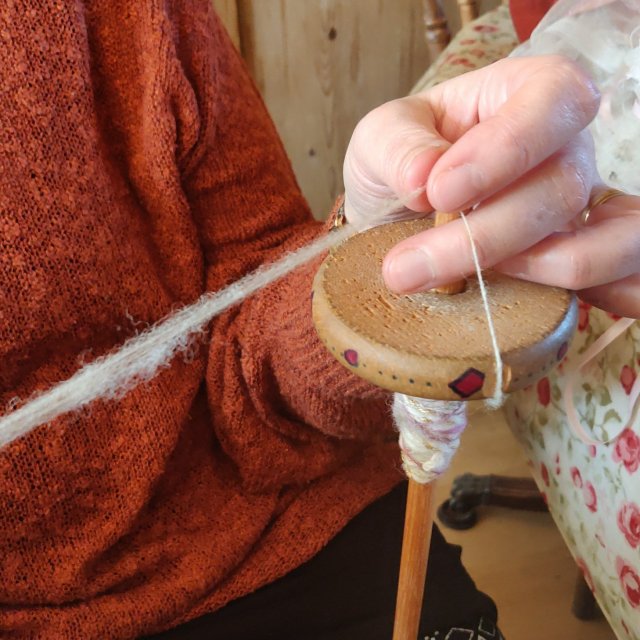 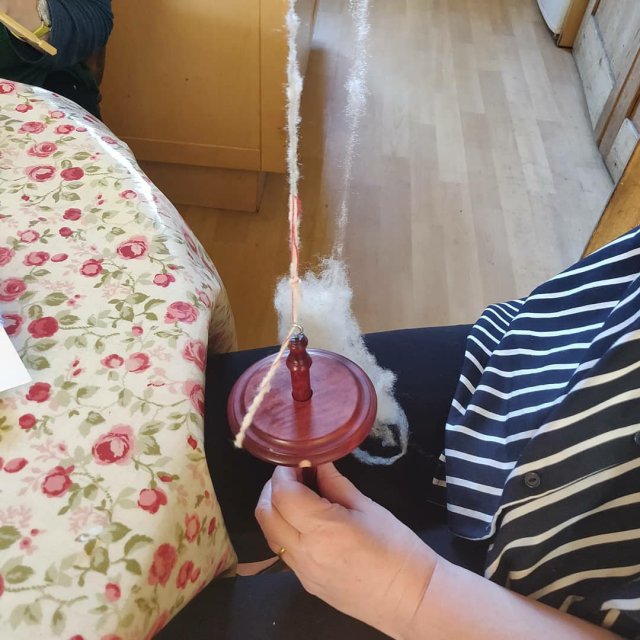 Strengthened by team and home made oat biscuits we progressed to the wheels.

The Ashford single drive, double treadle Traveller was the most popular. But even that took some easing into. 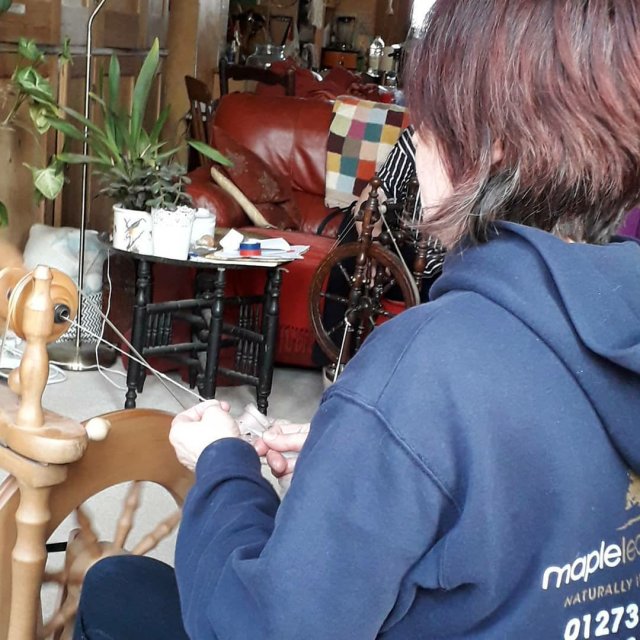 Everyone got some yarn made. 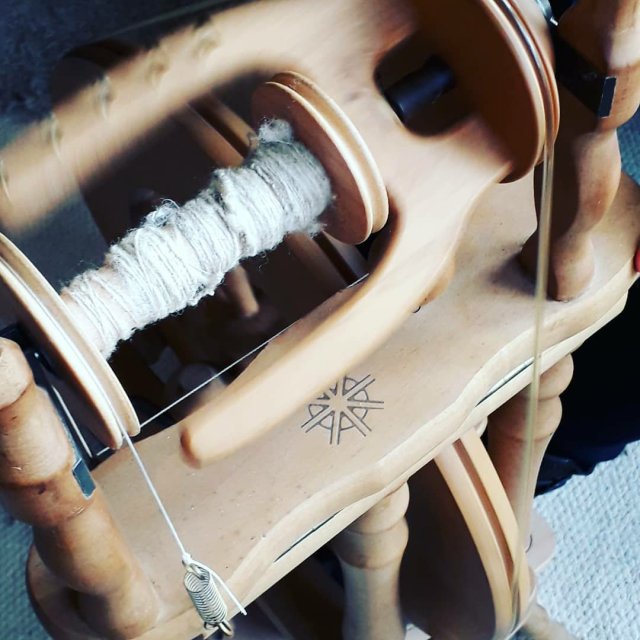 We plan another soon.

The last two days I’ve been at the FTC Futurescan4 conference in Bolton. It was stimulating and inspirational to spend time listening to the presentations and joining in discussions with fellow fashion and textile teachers.

My paper was about using textiles as a medium to raise awareness scabies; not a catchy title, but a fun project. You can read more about this on the project blog. 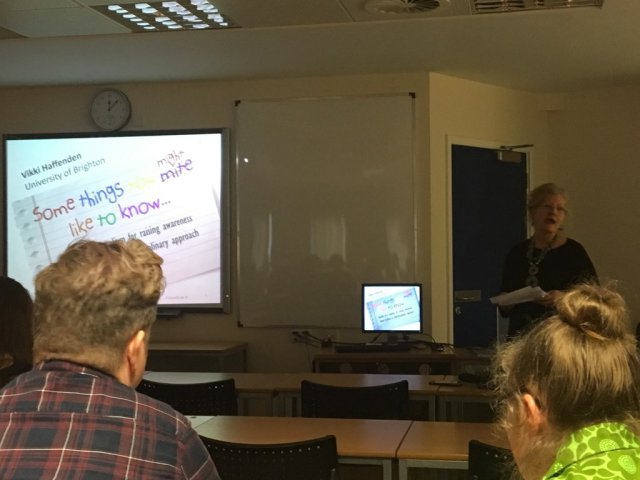 Here I am wooing my audience

Do you enjoy knitting in a group?

Mary Mussett and Dr Vikki Haffenden are very excited to be bringing these developmental Knitting Workshops to various venues in Brighton during 2016. In these workshops we will be combining our professional experience to provide you with the opportunity to enhance your skills in both mindfulness and the craft practice of knitting.
More information to follow soon
https://www.facebook.com/howzenisyourknitting/ 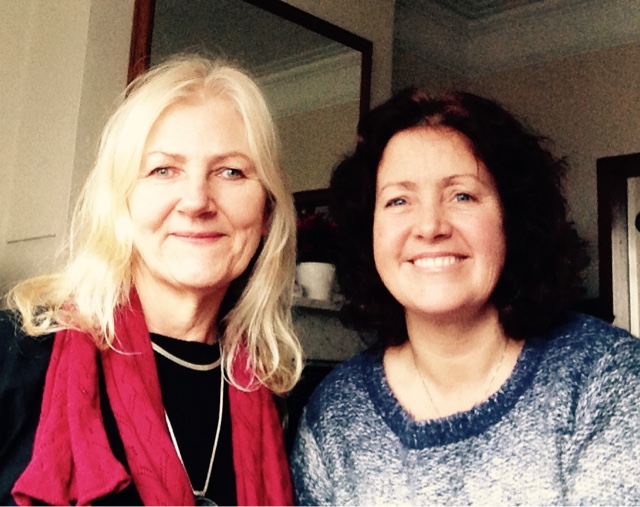