For a while I’ve been annoyed by the fact that bobbins jump around on my Lazy Kate when I’m plying yarns. I’ve got an Ashford one that the bobbins lie horizontally on and another on which the bobbin sit upright, and neither are very satisfactory. Various versions of a beautiful, tensioned Lazy Kates passed infront of my eyes as I visited various shop sites, but eventually my careful nature asserted itself and I decided I would be able to do this myself. More trawling t’internet followed and finally I had gathered a few ideas for both style of equipment. So I grabbed my little Dremel tool and got started.

First was the upright bobbin version. I drilled a guide hole and screwed in a small eye loop just off centre front. Next I did the same with a small hook, but offset to the other side of centre front.

A piece of fishing wire makes an excellent brake band – same as on my Ashford wheel. Join this to the eye hook, and the other end to an elastic band that goes over the hook, and your done. Shorten the elastic band as necessary, or better still add a brake band spring at the other end. I have some on order for this very purpose.

Some tweaking if wire length and elastic band strength has given me a tensioned Lazy Kate for about 50p.

The tall Lazy Kate was a little more effort. 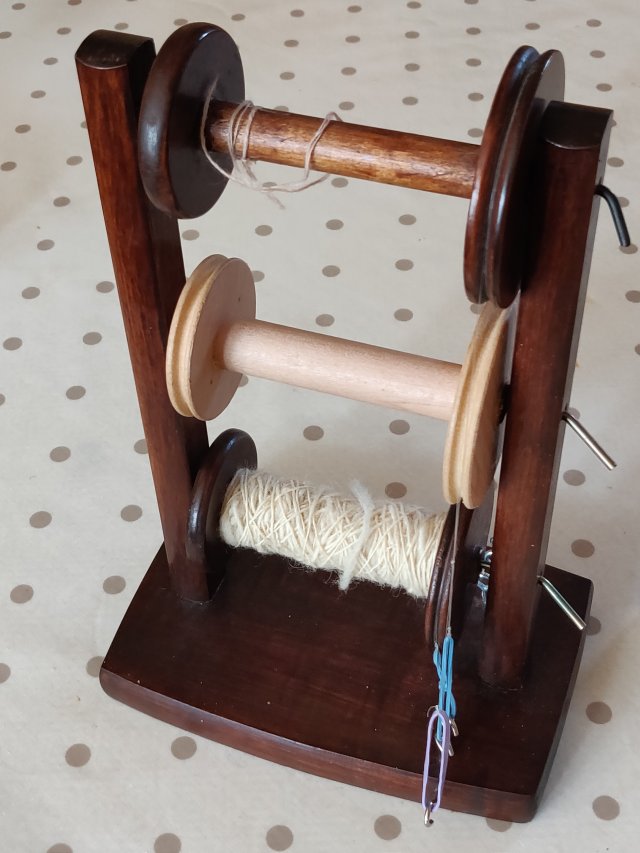 However, as you can see it’s much the same set up. Fishing wire brake bands go over the larger whorl and are held in place by eye hooks on one side and open hooks with elastic bands on the other. Springs will help even the tension and fiddling with the elastics lets you tension each bobbin independently. This is useful for fancy plies.

I’m still tweaking, but pleased with the result.